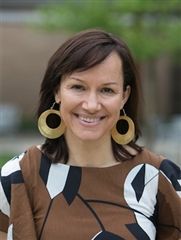 Suzanne Paxton ’88 is a Masters Fencing alumna, member of the 1996 Olympic Team, five-time Emmy award winning producer and founder of Point Studio. A member of the 1996 United States Olympic Team, Paxton was a top nationally and internationally ranked fencer in women’s foil individual and team competition.
She was first introduced to fencing at The Masters School with fencing Master, Francisco “Patxi” Martin. Her accolades include: competing in two national championships at Penn State; member of the U.S. National Team where she competed and won medals at World Cup competitions, Pan American Fencing Championships, World University Games and other international events; member of the team which won the first gold medal ever by a U.S. team in a World Cup in Cuba, 1992; represented the United States at the 1996 Olympic Games in individual and team competition; member of the 1996 U.S. Olympic Fencing Team in individual and team competition; Fencing Analyst for NBC Sports Olympic Games  Broadcast, Athens 2004; honored as an Olympic torchbearer in Amfilochia, Greece, helping to carry the torch toward the Athens Olympic Games; served as an Olympic Ambassador for the U.S. Olympic Committee, helping to prepare Olympians for international and Olympic competition.

We honor Suzie for her achievements in fencing.
Back